Welcome to the Indie Book Tour, where I read & review Indie & Self-Published novels in an exploratory and somewhat secretive fashion.

Today we are discussing Trial By Song by Alicia Gaile

There was time for one last gulp of air before the vines claimed their victim and dark, fetid water closed over his head. 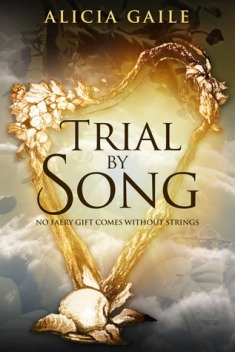 Trial By Song is the first novel in Alicia Gaile’s The Faery Trials series, an urban fantasy, with both YA & NA characters. Credibly straddling the line between both age-related genres, the older readers won’t be frustrated with the young characters, and the younger readers won’t be uncomfortable with themes too mature.

Main character, Jack Sorley, is the youngest of seven brothers with some extraordinary gifts. Jack’s gift lies in his extraordinary ability and passion in music. Gaile does an excellent job of distinguishing each brother, each with their particular gift and their mannerisms. It wasn’t difficult to keep each one straight, and with such a large cast that’s no easy feat.

The story starts midscene, which tosses the reader right into the thick of the main conflict; The Sorleys do everything they can to stay off the faerie’s radar, and that just isn’t working out for a young musician who wants badly to use his gift.

I was a little surprised at how little the characters reacted to some high stakes situations. No spoilers, but not every one makes it out alive, and I felt certain deaths should have sunk a little deeper. That being said, it’s really my only complaint with the book, and one I can easily overlook.

The world of Faerie was very well imagined and described on the page, and I’m excited for the next book to be set more in that environment. Gaile has clearly done loads of research on Fae mythology, and it pays off in a big way. From familiar elements, to deeper references you may be reading for the first time, the world is dark and dangerous and alluring. Just as Faerie should be.

What surprised me most, in a way that both impressed and amused me, was that I was halfway through before I realized I was in the middle of a Snow White retelling. Trial By Song isn’t about Snow White, it’s about Jack…right? But as the youngest of seven brothers, who take in a snowy-complexioned young lady being hunted by a pack of wolves spurred on by an evil queen, the novel may be from Jack’s perspective, but it most certainly isn’t about him. Not entirely, at least.

One of the things I loved about this novel was the antagonists were so well-developed. Each one is the protagonist in their own eyes, and the reader can easily identify with each and see how they could be in the right. Nothing is cut and dry, good vs. evil, dark vs. light. I have a feeling this theme will continue to deepen and strengthen in the next installment of the series.

Gaile’s prose are excellent, easy to read and beautifully evocative. Her characters are believable, and funny. I adored the sarcasm that ran rampant.

I will definitely be picking up a copy of the next book, and suggest you add this one to your TBR.

Go Check It Out On Amazon!

Trial by Song is Book 1 of The Faery Trials series, book 2, Cinder’s Dance has just been released. Head over to Alicia Gaile’s website for more information.

Want to know what I’m reading next? Follow me on Goodreads, and stalk my “Up-Next, On-Deck” shelf!

Have you read Trial by Song? What did you think?

What fairy tale do you think needs a modern retelling?

We Are Only Shadows: Book 7 (Awaiting Revisions)

The Dead of Winter Drafting)