He couldn’t describe her as cold or angry but talking with her was like slamming yourself repeatedly into invisible walls.

The destruction held some sort of chaotic beauty, a hypnotizing charm that went far beyond morbid interest. 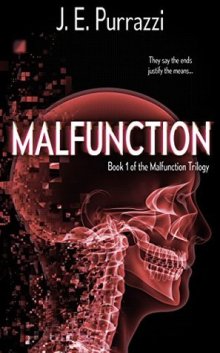 Malfunction, by J.E. Purazzi is a bio-punk sci-fi dystopian New Adult adventure for the mind and soul. (try saying that ten times fast!)

Don’t let my over-categorization turn you off though, if you enjoy character-driven plot, high-stakes intensity and and excellent world-building, you are in for a treat with this one.

I’m not much into sci-fi myself; my eyes glaze over at the technical stuff, jargon and science of it — Really, I’m much more of a ‘generalized explanation of the fantastic’ sort of gal. That being said, I knew I had to give this book a chance because of all the great things I kept hearing.

I was not disappointed.

As we all know by now, my main focus is on characterization. I can forgive a lot in exchange for a cast of characters who feel real and make me root for them. There wasn’t much to forgive here, or maybe I was just blinded by the smoothly character-driven plot. I was blinded by a set of 3 characters so well-actualized that I could easily hallucinate them walking (limping?) through my door in need of cover for the night. (Oh, did I mention that Purazzi loves to torture her characters constantly? Prepare yourself for plenty of blood and carnage.)

I actually had to take a brief break (a few hours) in the middle of Malfunction to decompress and process all that had happened. When I say that these characters couldn’t catch a break, I mean they could not catch a damn break. But the same high-intensity quality that caused me to take the break brought me back a 10 o’clock the same night to finish the book and know the ending as soon as possible. (by 1:30AM, I did)

Not having read much sci-fi, I don’t have much to compare it to on that front. However, I will say that that the descriptions of places, procedures and the society felt seamless and realistically inclined. I am an expert reader in suspension of disbelief, but this required very little from me. The world-building never felt bulky or intrusive, and Purazzi did an excellent job of only introducing new elements when they were necessary to the scene.

In Malfunction, we are quickly introduced to our three main characters. The first, or MMC, if you will, is Menrva, a brilliant genetic scientist with a painful past and an undeserved bad reputation. Despite being the first point of view the reader is introduced to, Menrva takes the longest to figure out and piece together. She is closed off to everyone, including the reader, as a result of the painful trials she has endured. Watching her slowly grow and open-up throughout the story was a treat because of how natural and believable Purazzi was able to write her. Menrva comes off terse, somewhat-rude and definitely angry in the beginning (and middle for that matter) but by the end you have forgiven her because you know it is hiding a deeply wounded, extraordinarily caring young woman.

The next point of view the reader shifts into is Cowl, the stereotypical ‘covering my pain with humor’ hot head who also happens to be a genius programmer/hacker. Cowl was the hardest for me to warm up to, which might have been because he was the most humanly-flawed character of the three. He struggles with his anger and jealousy constantly, but he is such a staunchly-loyal, devoted friend that in the end you have to love him. Plus, his penchant for guns is hilarious and strangely adorable. Oh, and when he starts counting prime numbers in irritation you may feel conflicted by the need to both laugh, and hug him.

Bas, or Bastille, is the final main character we are introduced, and it’s definitely a case of Purazzi saving the best for last. As a genetically-engineered, cybernetically-enhanced, super-soldier, you wouldn’t necessarily immediately associate Bas with pain, gentleness and warmth…or would you? As soon as the reader is plopped down in his head, the book is a completely different beast. Both Menrva and Cowl’s emotional scars have made them sarcastic and somewhat closed-off, but Bas’ scars (literal & figurative) have left him as a poorly socialized, deeply-hurting, absolute sweetheart.

Cut off from normal human-interaction and development at the age of five, Bas has been emotionally and physically abused constantly for at least fifteen years. He understands little about body language and verbal-cues, and is really just muddling through his friendships with Cowl and Menrva as best he can. Juxtaposed in a very unnerving way, he was made for violence, is excellent at committing violence, and very much enjoys violence. You might not think that this would work, but Purazzi makes it believable somehow. It was a real treat to be in Bas’ POV, and definitely one of my favorite parts of this book.

Folks, what I’m trying to say is actually pretty simple: Purazzi knows how to world-build, and character-build. When you know how to do these things well, the plot just falls into place.

Malfunction is the first book of a trilogy, the second is to be released sometime this summer. The end is definitely a cliffhanger, yet it also felt complete. Like, Part I: done. Now, onto Part II…

So, yeah, you know all those great things you’ve already heard about Malfunction? They’re true, and now is a great time to pick up the book and acquaint yourself with the fascinating, flawed, root-for-worthy characters.

Go Check It Out On Amazon!

Also, stop on by J.E. Purazzi’s Website  and check out what else she has in the works (including some short story ‘prequels’ from the Malfunction series!)

Want to know what I’m reading next? Follow me on Goodreads, and stalk my “Up-Next, On-Deck” shelf!

Have you read Malfunction? What did you think?

What is a book outside your preferred genre that pleasantly surprised you?

One thought on “Review: Malfunction by J.E. Purazzi”

We Are Only Shadows: Book 7 (Awaiting Revisions)

The Dead of Winter Drafting)